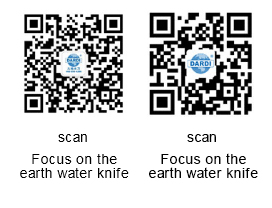 In addition to the new car, the water knife also has a period of wear and tear

The grinding period is an important link to ensure the normal operation of the water knife, reduce the failure rate and extend its service life. Many people do not pay much attention to the special requirements of using water knives in this period. They are overloaded for a long time, which leads to frequent failures in the early use of water knives. New assembly parts, geometry shape and dimension deviation, at the beginning of the use, due to alternating load such as shock, vibration, and the influence of factors such as heat, deformation, and the wear too fast, easy to make the original loose fastening parts produced. As a result of the new assembly parts fit clearance is small, and due to reasons such as assembly, it is difficult to guarantee the uniformity of fit clearance, lubricating oil (grease) in less friction surface forming oil film evenly to prevent wear and tear. Therefore, the lubrication efficiency is reduced and the early abnormal wear of water knife is caused. In severe cases, the friction surface of precision coordination will be scratched or occluded, leading to the occurrence of faults.

Just as cars need to be more careful in their speed and maintenance than they are in normal times, water knives are also true. Due to insufficient understanding of the structure and performance of the machine (especially the new operator), it is easy to cause failures or even mechanical accidents due to operational errors. During this period, the maintenance of water knife must be done in accordance with the manufacturer's requirements. Try not to use the maximum pressure to carry out the cutting process during the water knife grinding, and try to keep the long grinding period. Do not press impatient to start up, very urgent to return the investment. During the use of water knife, more attention should be paid to various reactions in the process of cutting water knife, and some minor problems should be dealt with timely.

Another reason is that the cause of the water knife factory production itself, it will need to remind friends when buying water knife manufacturer for the various aspects of word of mouth and machine performance have some idea, don't just listen to manufacturers say oneself how, also don't too pursuit of price, a price a points goods you should also know this truth.